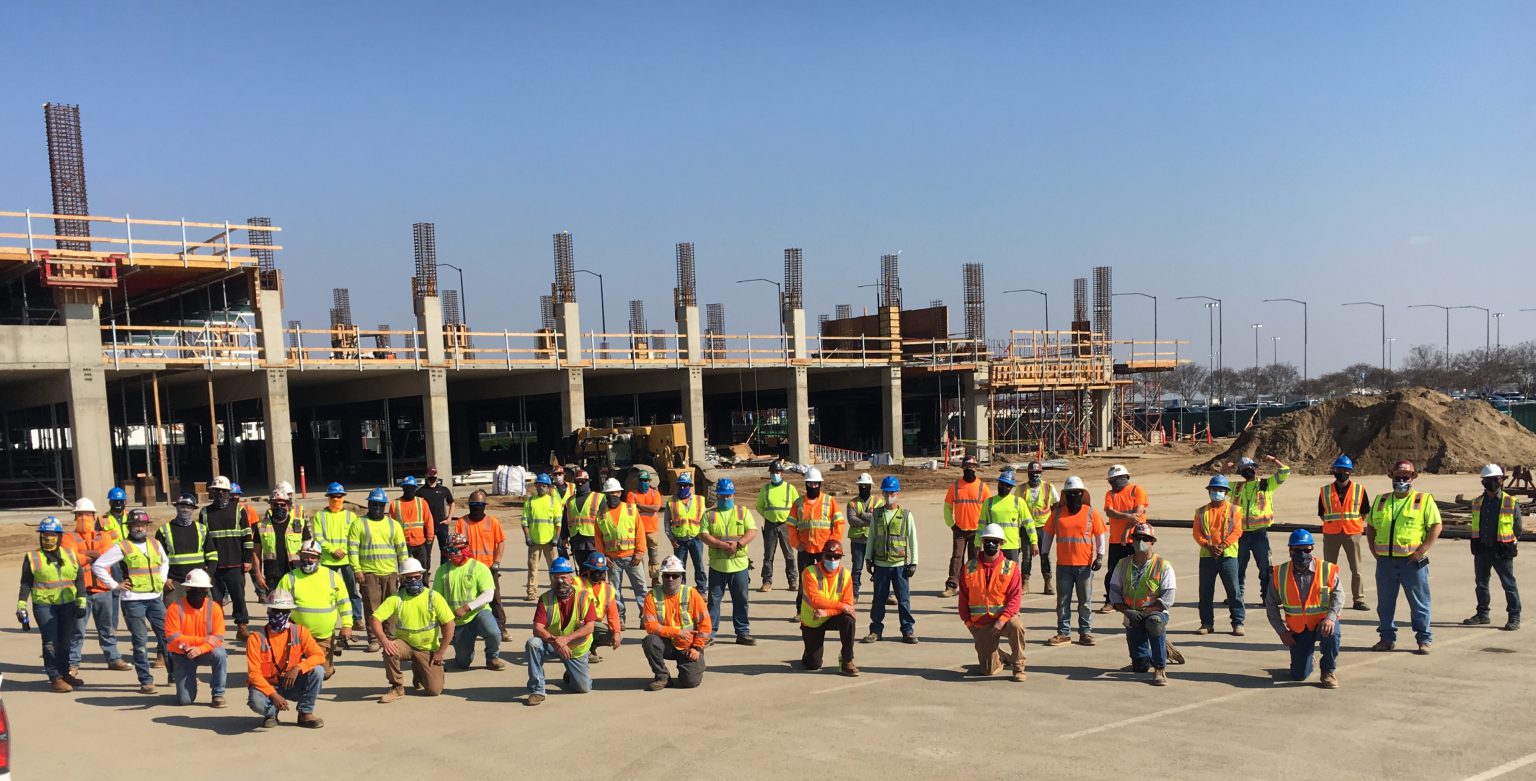 By Tim Sheehan April 14, 2021, The Fresno Bee
https://www.fresnobee.com/latest-news/article250674364.html
A new parking garage under construction at Fresno Yosemite International Airport is expected to open in October, ahead of schedule and, remarkably, under budget, Fresno Mayor Jerry Dyer said Wednesday during a tour of the rising structure.
The groundbreaking for the $29 million, four-level garage was in September, and Dyer noted the speed at which construction has progressed since. “When you look at what’s been occurring over the past several months, it’s impressive,” he said. “This project is not only on time, it’s going to finish early, and it’s also going to be under budget.”
“Any time you can get a project that’s ahead of schedule and under budget, that’s an incredible project,” he added.
Kevin Meikle, airports director for the city of Fresno, said crews will finish pouring the last of the concrete work – about 12,400 cubic yards of material, plus 2.4 million pounds of steel reinforcing rods – by the beginning of May.
When it opens in the fall, the garage will have 917 parking stalls located immediately across the terminal access road Anderson Avenue from the terminal building. That will bring the total number of stalls available for parking at the airport to 3,600 – a net increase of almost 700 from before construction began.
Inside the structure, hundreds of braces shored up the floors above; on the topmost level, workers are wrapping up the installation of steel rebar before more concrete is to be poured on Thursday.
As Meikle led Dyer and local reporters on a tour through the cavernous structure, workers continued installing steel rebar and wooden forms. At one point, a worker recognized the mayor and told his co-worker, “Hey, it’s Jerry Dyer.” Dyer heard him, turned back, shook his hand and chatted briefly.
“Some 300-plus workers have been committed to this job, more than 50 a day working on this project,” Dyer said. “That’s providing good-paying jobs within the city of Fresno.”
In addition to more parking, the garage will include a “smart parking” system of automated stall counters and signal lights to let drivers know if there are any spaces open before they enter the garage, and on what level.
“That means people won’t have to be driving around various parking floors to look for parking,” Dyer said. “There will be red and green lights within the garage that allow people to know whether stalls and where those stalls are within the garage.”
BIGGER AIRPORT EXPANSION PROJECT
The garage is the first stage of a larger airport terminal expansion dubbed “FATforward,” drawing on the airport’s official designation of FAT, based on the former moniker “Fresno Air Terminal.”
The $115 million project will include the addition of an upper-level concourse with two new gates and jet bridges that can be used for both domestic and international flights; enlarging the segregated arrival and Customs area for international passengers; expanding the luggage-handling and sorting area for outbound flights; and increasing the number of Transportation Security Administration checkpoint lanes.
In 2019, airport leaders had expected to begin that construction this year. But the COVID-19 pandemic slashed the number of people traveling by air, not only in Fresno but nationwide, and the work was delayed.
Now, Meikle said, design work for the expansion is about 80% complete, and work inside the terminal building is anticipated to begin in the spring of 2022 and take 24 to 28 months to complete.
But, he added, the garage has always been envisioned as a needed first step.
“From a capacity standpoint, parking was our pinch point pre-pandemic,” he said. “Now as we’re coming out of the pandemic, it’s quickly becoming our pinch point once again.” While travel volume has yet to fully recover, there are days when the parking lots are 100% full, Meikle added.
Business travel still seems to be lagging at the Fresno airport, but there has been a significant upswing in leisure travel – something that’s expected to accelerate later this month when Southwest Airlines starts operating three daily round trips between Fresno and Las Vegas and one daily round trip between Fresno and Denver.
“We are growing out of this thing; we are getting busier,” Meikle said. “We anticipate being fully out of the pandemic, with regard to our activity level, by this summer, 100%, and then by the end of the year in the 115% range.”